Not much is known about the Ataxius, not even what it choses to call itself. It rarely communicates with others, prefering to ignore them, or attack. It doesn’t always kill those it attacks, but it often leaves lasting curses or debilitating effects.

It has a small domain in the Hive called The Maw, a name that tells inquisitive souls all they need to know about what it looks like. Unlike many hive dwellers, the Ataxius doesn’t seem to spend a lot of time in its own Domain, instead choosing to wander the tunnels in search of prey or amusement.

Incarnae who are still getting their bearings avoid the Ataxius if they’re wise. 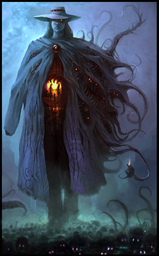