Damsel in a dress.

Mission is young, though she tries to appear older if she can, and never gives out her exact age. She’s a meddlesome girl but she’s got a lot of guts, trying to make something of herself from a pretty shabby starting point.

So far she’s tried to make it as a dancer, a singer, a rum-runner, and a blackjack dealer. None of those opportunities have panned out for her so far. A true ‘modern’ girl, she refuses to try and make her fortune via some man. She’s trying (and currently failing) to make it on her own.

She’s young yet, so if she survives, she’ll probably end up as someone pretty special. However, she keeps trying more and more dangerous schemes so her chances of survival don’t seem great. 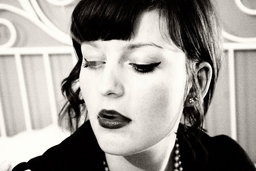